skip to main | skip to sidebar

everything is possible... the impossible just takes a little longer

slow and steady wins the race

These are pics of a few new friends we met. With our special passes from Make-A-Wish and Give Kids the World we were able to jump right to the front of all the character lines. I felt a little bad about it at first... the lines were always really long and so a few times we just got into the regular line with everyone else. However when anyone saw our badges they would escort us to the front of the line. One of the character helpers told me...

"you guys have to wait for enough in your lives and have had so many more challenges... you have a special pass for a reason and so no matter what anyone says you enjoy yourselves here, you are our special guests and special guests never wait... everyone here (at the parks) is always on the look out for your pass and they want to make your experience here one to remember and enjoyable and this is just a little thing that we can do to make things easier for our special guests. So please don't wait in lines anymore... Mickey said so" 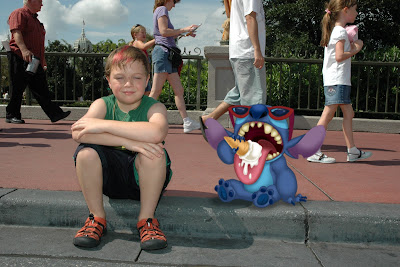 We actually had to wake Sam up several times during his visit with Woody and Jesse. It was such a hot day and we had a late night the night before. Sam just couldn't keep his eyes open. But they were very sweet. 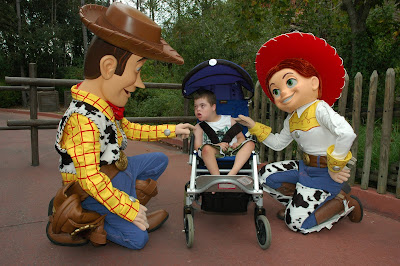 Sam loved Goofy and Donald. He gave them both kisses. 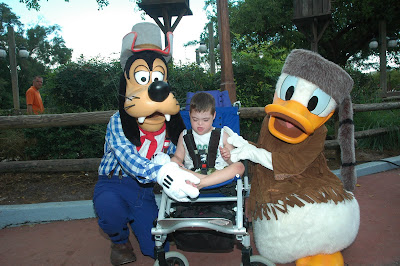 Jedi Training Academy was sooooo cool. Andrew got to battle Darth Vader. Sean was a bit more leary of him but they all had a fun. 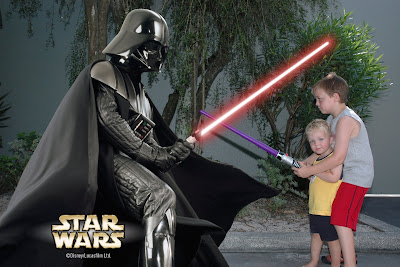 Oh how Sean Love's Cars. I thought he would be so excited to Lightning McQueen and Mater, but seconds after this pic was taken he fled the scene. 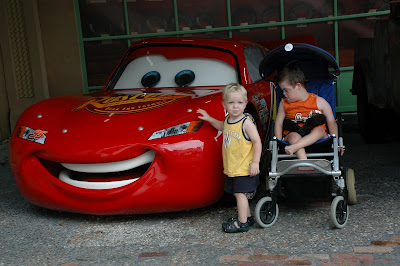 All you need is faith, trust and little bit of pixie dust. (notice Tinkerbell in our hands) We were all soaking wet from the rain but I think the picture turn out really cute. Sam enjoyed meeting Buzz Light Year. We caught him just as it started raining.... it was a down pour. Andrew and Sean played in the rain while Sam met with Buzz. People kept asking us if we needed an umbrella... I said "no... it is snowing in Chicago... the rain is fabulous!" 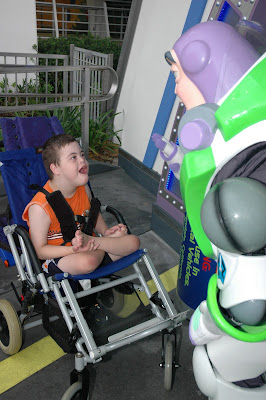 OMG... the Princesses.
Sam was ga-ga over the Princesses. Picture this... I am soaking wet and standing in line with all these other mom's dressed to the hilt with their daughters in gowns and wings and all glittery and here I am with Sam. We of course got to go ahead of the line and I think they thought I was there to see the princesses until they saw Sam's reaction. He ran right up to the bench and called Cinderella over to sit next to him. He was so bashful at first and grinned from ear to ear. He gave her a big hug and was so excited when she signed his book. 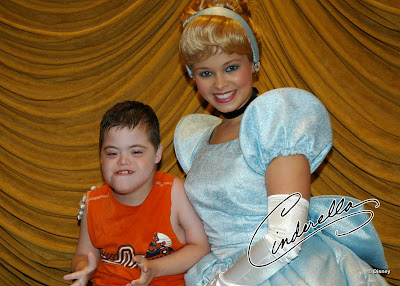 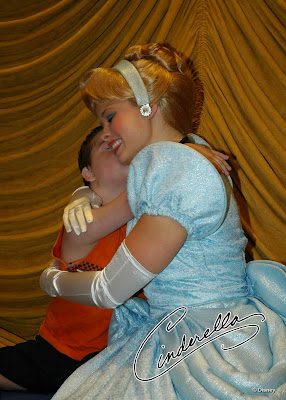 Then he saw Princess Aurora (Sleeping Beauty). He danced with her for awhile then took his seat next to her on the bench. I thought he was going to climb right into her lap. H blew her kisses and could barely keep his hands to himself. When it was time to leave I took Sam's hand and said "Let's go Sam" and in his clearest most assertive voice he said "NOOOOOOO" and then looked back at Aurora and batted his eyes. 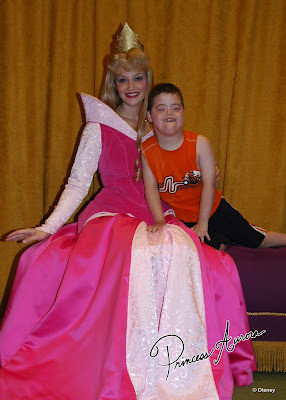 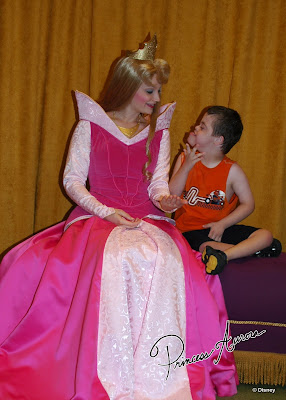 He was not so thrilled with Wolverine but I think he was still a bit scared after the interactive Spiderman ride. 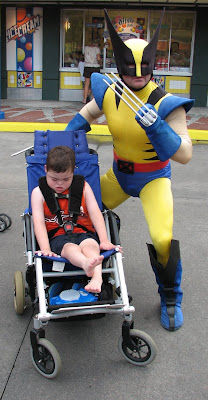 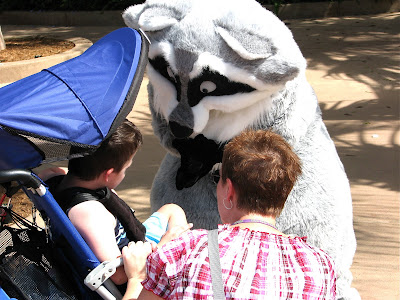 Sam really enjoyed Goofy each time he saw him. This was a special visit at Give Kids the World. Sam danced with him and gave him kisses. 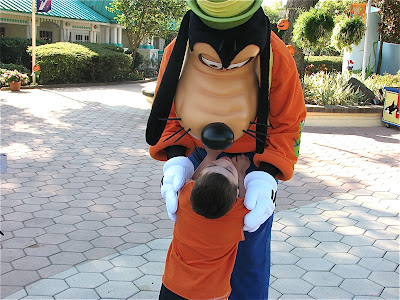 Pluto also made a big impression. I would be willing to bet that Sam appears in several other families pictures with Pluto... I just couldn't keep him away. This was also taken at GKTW. The private meetings that they have set up each morning are so special. Sam got to spend more time with them and you could tell he was really enjoying himself. 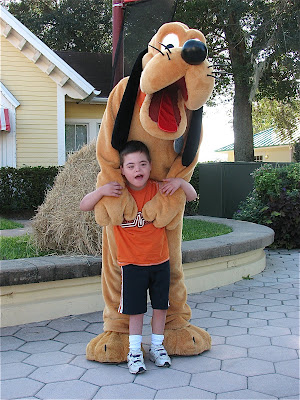 I absolutely love this picture! 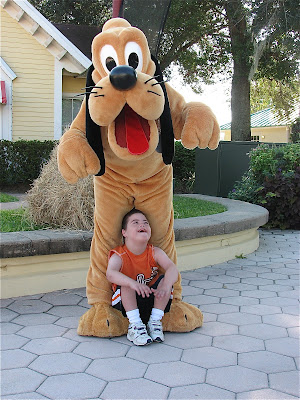 Big kisses for Mickey (at GKTW) 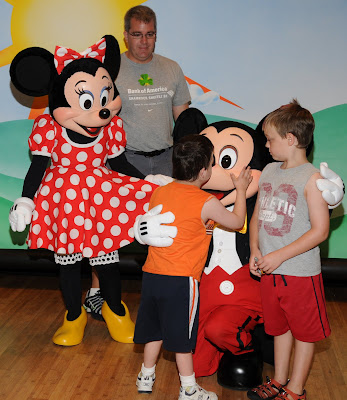 Special meeting with Mickey and Minnie. 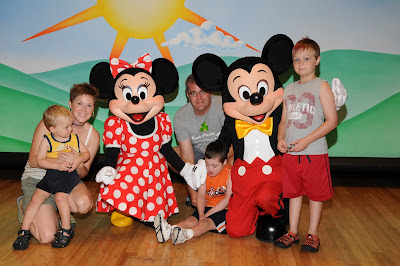 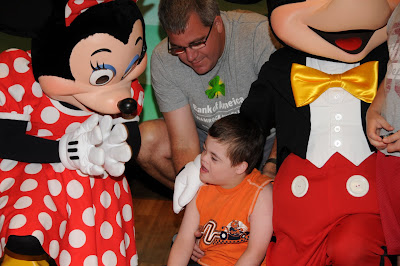 I don't know why Rae but I cried as I scrolled down and studied each picture.You guys look like you had such a blast.And Sam,well he was so precious.Each expression on his face was priceless.I found my self blowing each of them up and looking him up and down and seeing Zoey and her future, in him and it made me cry.Happy tears.We have been asked numerous times whether we would consider doing Make A Wish.I'm on the fence.After the last year,who knows, maybe we should just do it.

Oh, these pictures just made me cry. How wonderful!

I love the pictures - oh my gosh it looks like you just had so much fun. How exciting to see all the boys amazed by the dolphins .. I am so glad that everyone had fun!

rae
As luck would have it, I am blessed to be the mom of 3 exceptional boys... Andrew, Sam and Sean, and to be married to Patrick. Amidst the pandemonium that I have become so accustom to, I am also an artist and boxmaker.

Sam was born 13 weeks premature and he has Down syndrome, but that hasn't stopped him. He was blessed with an extra chromosome and we are blessed with so much more. Sam teaches us all that... slow and steady wins the race.

SPREAD THE LOVE and learn more about Down syndrome

Hi Friend, My name is Sam and I spent lots of time in the hospital too... so my Mom made this especially for you!

All proceeds benefit The Poncho Project

Please do not copy the text or images on this site without my permission. Thanx

under construction... check back later.